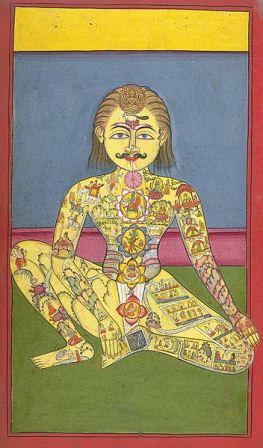 Sapta Chakra, from a Yoga manuscript in Braj Bhasa language with 118 pages (1899).

Chakra is a concept originating in Hindu texts, featured in tantric and yogic traditions of Hinduism and Buddhism. Its name derives from the Sanskrit word for “wheel” or “turning”.

Different systems posit a varying number of chakras; the most well known system in the West is that of seven chakras. It is typical for chakras to be depicted as either flower-like or wheel-like. If flower-like, “petals” are shown around the perimeter of a circle. In wheel-like, spokes divide the circle into segments that make the chakra resemble a wheel. Each chakra possesses a specific number of segments or petals.

Texts describing the chakras go back as far as the later Upanishads, for example the Yoga Kundalini Upanishad.

In modern India, Braj Bhasha exists as an unofficial dialect spoken colloquially by natives of the region of Braj Bhoomi, with great cultural and religious significance. Much of Hindi poetry, especially that of ‘Bhakti’ or devotional poetry is in this language. Some devotional poems for Krishna are also composed in Braj Bhasha. The famous poet Aamir Khusrau, also spoke and composed poetry in this language. Braj Bhasha is also the main language of Hindustani classical music compositions.