Questions and Answers about Bindi Dots and more 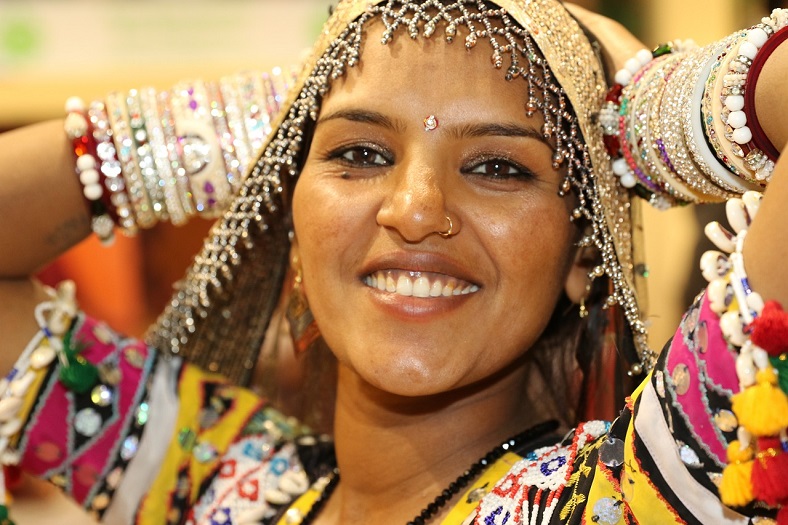 Dots on the forehead of women and sometimes on men are commonplace in India. Here in the USA you rarely see them. But if you are in an area where there are Indians (from India) you will see such dots, called Bindi dots on the forehead of some women. As you can imagine, if you are not Indian or from some other place where such dots are worn, they have a particular meaning.

Other places on the site explain the meanings of the dots but here are some questions and answers submitted to Yahoo Answers regarding these colored dots worn on peoples foreheads. Do not take the answers necessarily as fact because they are probably a person’s opinion, and as such could be incorrect.

Why do Indians have that dot on there forehead?

I’ve always wanted to know what it was for and what it represented you know that one brown or black dot they have on there forehead and also wanted to know if they were born with it or they just put it on after is it like a sticker?

They are hindus and believe that their third eye is located there. They usually use sandal wood paste to make the dot. Here is a description of it:

The encyclopedic dictionary of Yoga informs that this ‘Ajna Chakra’ is also
called as the ‘Third eye’. This center is connected with the sacred syllable
‘Om’ and presiding it is ‘ParaaShiva’. After activation of this center, the
aspirant overcomes ‘Ahamkar’ (ego or sense of individuality), the last hurdle on
the path of spirituality. (Encyclopedic dictionary of Yoga, by Georg Fuerstein,
Paragon House Publ, NY, 1990,p.15).

Thus the monks apply the auspicious mark of Kumkum on the forehead as an act of
worship to the inner Guru to overcome ego. It is also the same reason why
married women wear the ‘red dot’. After marriage Hindu women give up their name.
They take the pains of pregnancy and delivery, yet the child carries father’s
name. This selfless sacrifice is done out of love, and for the sake of family
and society. It is for this reason wearing the red dot is considered a sign of ‘
Soubhagya (good fortune)’, because sacrificing you ego and performing selfless
action out of love is considered a sacred act and a good fortune.

Why was I born with a red dot on my forehead?

I was born with a perfectly circular red dot in the middle of my forehead, i looked like a little Indian child! haha. does anyone know if this signifies anything? thanks!

You are the coming of a Hindu God.

What does that red dot mean that are on Indian men’s forehead? And can you tell ne more about that culture?!?

Ok so i am african american and i like a kid who is indian and he likes me as well.we aren’t dating or anything like that but we do have crushes on each other.i haven’t seen him in a while but i was wondering if you could help me out with this whole culture thing i know that some indian families don’t like him dating an african american girl.i would like to know what kind of indian he is..like which part of india is he from.i jut found out that people from indian are not the same i mean they have different cultures in different parts,The only thing that i can tell you is that he is indian and super cute and he has the red dot on his forehead i still don’t know what that thing is,so can someone help me out i am not being racist i am just curious don’t tell me to look it up dammit and don’t tell me to look up sparkle rai

Several belief systems believe in chakras. They are pools of energy, and sometimes seen in a religious sense. The one between the brow is the third-eye chakra, or more properly, the Ajna chakra. The gem is used for meditation, as it is believed that different materials can channel energy better. Off the top of my head (though I make no promises), I would suggest that, given her location, she is Hinud, so I’d look into that, or chakras in general.

So, I just moved in to a large apartment with horrible carpets- the entire place is covered in poop green/gold colors. How am I supposed to decorate with that? Area rugs sound like a good idea but I’m a college kid and broke- not able to afford a huge rug to just cover it all up with. I thought maybe an Indian look (dot on your forehead Indian not woo woo Indian) but thats just trendy and not exactly something that will stay my style for the next 5 yrs or more I will be here.– So yeah, any ideas on how I can decorate? including links/pics would be great – thank you.
rosebush- your answer was not only great for the ideas but also inspirational- a good pick me up- thank you!- thank you to all who replied:)

LOL…love your descriptions..if your carpets are the same colour of poop as the ones I had in an apartment I rented years ago, then you might be surprised at how well they will blend with everything and not show up much dirt too! You can always stick with neutrals like off white, tan, beiges, soft yellows, brown, and use small pops of colour..reds, bright blues, deep purples..colours like you were talking about, but they can be added in small amounts using one or more..in this manner you can go from a very light palette to something more dramatic for a small amount of money throughout your college years..use throw pillows, lap blankets, glass vase or plate, artwork, picture frame..that sort of thing for colour.
You could also try an off white for all your furnishings (slip covers are great for this), dark accent tables, and use a brighter lime shade of the carpet for pillows and have that as the only real colour with clear glass bowl with green apples in it for decoration. Fruit makes great decor and can be replenished every week when you do your groceries.

Hey, pure curiosity no offense…what’s up with the red dots on the forehead? Indian people I guess?

The red dot is called BINDI
it indicate three things
1. The woman is Hindu
2. She is married& love her hubby
3 , she have a husband who is alive and well
BUT the most important aspect is it is related inside to that part of brain , which has emotional attachment of pure LOVE & SACRIFICE
NICE curiosity thanks

Okay I know the red dots are for married women, and young girls wear like sequined bindis and stuff, but are some girls just born with them? And for the married women with the red dots, how do they get them? Do they draw them on?
I don’t mean to sound dumb but I seriously don’t know, and I’m really curious.

I’m Indian so i know this but nobody is born with the bindi, you can buy it at indian stores, they come in little tubes that look like mascara tubes. Ya you apply it to your forehead. There are also stickers which are called tickli’s that you can use as bindi’s. It’s like kohl (eyeliner) but you only use it on your forehead. Hope this helped! 🙂

i was born with a pink/red dot on forehead what does it mean?

when i was born i had a pink/red dot on my forehead
and I’m not indian I’m white
so my mom said its like a “kiss by an angel” but i really want to know what it means I’m 14 now and it faded awhile ago
does anyone know what that means?

It sounds like probably just a birthmark, which is very common and really doesn’t mean anything. Just like other pigmentation – freckles, etc. Here’s a site with more info, below. Unless you’re wondering about a more spiritual meaning, in which case I don’t know. Health-wise, it doesn’t mean anything. You’re fine 🙂

Why does an Indian Lady wear the “Tilak” or the “Dot” on her forehead?

It has been a tradition from times immemorial to see an Indian female individual wearing a round shaped red / vermillion mark on her forehead. Initially, the elder generation were traditionally wearing turmeric powder just above the bridge of the nose, and them applying the red vermillion powder oon it, and that too with their second finger of the right hand. Now a days it is a minute gummed velvet dot or a weird shape that makes its presence felt on the forehead. The actual reasoning for fixing this “Tilak” may be lost somewhere down the line, but this is my attempt to fathom why they wear it or whether they are blind followers of a tradition, maybe started with a reason. Your personal view will be great!

Hey Man,
Nothing Is Wrong Which Is done By Our fore father,
I Have Not Read Your Question Completely, but
i like to answer for your question..
The Light Which Is Coming From Sun Also Includes IR And UV Rays, If Its Directly Falls On Forehead, Due To The Reaction Help Problem Will Occur,..
So The Reaction Rae Is More Lady, So They Keep Tilak And Dot

So wearing such dots on the forehead can have different meanings. Next time you see someone wearing a colored dot on their forehead, probably a woman, you will have a better idea of what it represents.