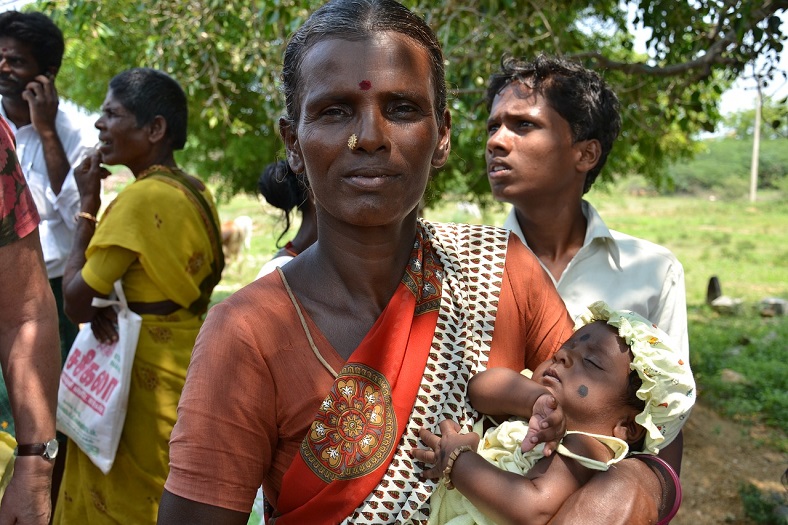 The dot on the woman’s head is a bindi dot.

Have you ever wondered why Indian women wear a dot on their forehead? Depending on where you live (outside India) you might see a few once in a while or rather rarely like where I live in Southern California. Of course if you live in an area where there are lots of Indians (not Native American Indians) then the situation might be a lot different.

Here are some questions and answers submitted to Yahoo Answers about Indian Women’s Dot on their Forehead.

DO you know what the dots on the forehead of Indian women mean ?

Just curious …Seen Indian women with the dots on the forehead…does anyone know what it means culturally or socially ? Do different colours have different meanings…are they worn on special occasions?

It is a sign of marriage. The original color was red. Now women are experimenting with other colors for fun.

What does the “red dot” on the forehead of Indian women represent?

The red dot is named bindi (from Sanskrit bindu, meaning “a drop, small particle, dot”) and is a forehead decoration worn in South Asia (particularly India) and Southeast Asia. Traditionally it is a dot of red color applied in the center of the forehead close to the eyebrows, but it can also consist of a sign or piece of jewelry worn at this location.

Nowadays, bindis are worn throughout South Asia (India, Bangladesh, Nepal, Sri Lanka and Pakistan) by women and girls, and no longer signify age, marital status, religious background or ethnic affiliation. The bindi has become a decorative item and is no longer restricted in color or shape. Self-adhesive bindis (also known as sticker bindis) are available, usually made of felt or thin metal and adhesive on the other side. These are simple to apply, disposable substitutes for older tilak bindis. Sticker bindis come in many colors, designs, materials, and sizes. Fancier sticker bindis are decorated with sequins, glass beads, or rhinestones.

Outside South Asia, bindis are sometimes worn by women of Indian origin. Some Western women who have converted to Hinduism, such as in the Hare Krishnas, also wear bindis. Sometimes they are worn as a style statement. International celebrities such as Gwen Stefani, Shakira, Madonna, Nina Hagen, Nelly Furtado, and Shania Twain have been seen wearing bindis.

The area between the eyebrows (where the bindi is placed) is said to be the sixth chakra, ajna, the seat of “concealed wisdom”. According to followers of Hinduism, this chakra is the exit point for kundalini energy. The bindi is said to retain energy and strengthen concentration. It is also said to protect against demons or bad luck.

In addition to the bindi, in India, a vermilion mark in the parting of the hair just above the forehead is worn by married women as a symbol of their married status. During North Indian marriage ceremonies, the groom applies sindoor on the parting in the bride’s hair. Ancient Chinese women wore similar marks (for purely decorative purposes) since the second century, which became popular during the Tang Dynasty.

Why do some indian women have a dot on there forehead?

I dont understand this why is it there how does it get there, does it change colors?

Everyone of these answers are stupid!, you people could have at least googled it before you answer.

Anyway, the “dot” as you call it is called a “bindi”. It comes from the hindu religion, usually only married women wear it. It is supposed to protect the sanctity of marriage and insures that everyone knows that the woman is married (so no other guy tries to hit on her). Here are very good links to the bindi, where it came from and what it means today 🙂

Could this be you earning part-time income blogging from home? Click image to find out.

what does the red dot on an indian women’s forehead signify?

I think the true meaning has been lost over many centuries.

waht does the red dot mean on the forehead of some indian women and what about the black dot?

The dot on the forehead, often called a bindi, has several meanings.
– Married women often wear the red dot as a symbol of their marriage status. Traditionally unmarried women wore black dots – but that is changing.
– That point on the forehead is known as the third eye, and often is related to a type of wisdom.
– The dot is also seen as a symbol of purity and beauty.

Do only Indian women have the dot on their forehead?

Or do other muslim women do it?
Interesting answers.

Well Indian is just a nationality, not a certain culture, race, or people – I don’t think people realise this. 40% of Indians are more or less exactly the same genetically, culturally, etc – but the rest of India is extremely diverse. See what I mean:

It’s easy for other people being ignorant, but for Indians it is very patronizing because you can’t shove us all into one boat when a lot of us are completely different from one another – I learn about other cultures to stop being ignorant so other people should do the same – Indian is NOT a race/ethnicity!

Back to your question, the ‘dot’ on the head – is called a ‘Bindi’ it is in Hindu tradition – although not all Hindus wear it – it is a common cultural trait in South India and Bengal and Gujarat, and Maratha – but I am Punjabi Hindu – and it is not a cultural trait for us – Muslims don’t wear it because their religion totally forbids it – sometimes Sikhs who follow Hinduism partially also wear Bindis but very rarely.

What does the red dot on some east Indian women foreheads mean exactly?

And what about the black one?
Marriage? are you sure? because I usually see the ‘black’ dot on older women, and just recently saw the red ‘Bindi’ one on a (I’m guessing) 7 year old girl! (But it was a big dot, and it was rimmed with a thin line of black, I saw her in the community paper, she was dressed up to be in some sort of dance)

The red dot is a symbol of her marriage. A North Indian woman wears a red streak on the parting of her hair. An unmarried woman sometimes wears a black dot on her forehead. This black colour is used to counteract the effect of the evil eye. If a lovely young girl gets too many compliments, Indians feel that some kind of harm may come to her, so this dot repels evil influences.

what do u call the black dot on Indian women’s forehead?

Bindi/tilak. It is a mark worn on the forehead and other parts of the body for spiritual reasons. It is commonly seen on women (especially married ones), Hindu priests, practising brahmins and other Hindus on religious occasions.

what does the red dot on indian’s women forehead mean?

The area between the eyebrows (where the bindi is placed) is said to be the sixth chakra, ajna, the seat of “concealed wisdom”. According to followers of Tantrism, this chakra is the exit point for kundalini energy. The bindi is said to retain energy and strengthen concentration. [1]. It is also said to protect against demons or bad luck.

Here is more information about such dots on Indian Women’s foreheads.