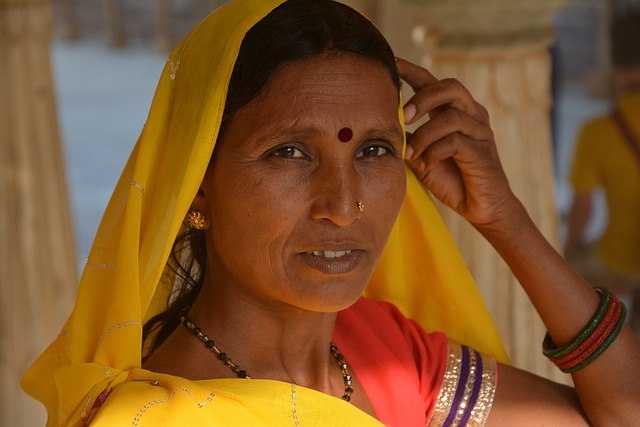 The dot on her forehead is a bindi dot.

Evolved from the Sanskrit word ‘Bindu’, the bindi is a small dot, or a tiny particle that is used for forehead decoration generally by women. It is great Asian forehead art, the bindi dot decoration. It is the most interesting and fascinating form of decoration of all the other body decorations.

The Bindi Dot is a decoration used on the forehead just above the centre of the two eyebrows. The Bindis are the fascination of the south East Asian countries like India, Bangladesh, etc. Originally it was circular red dot but various forms, shapes and colors of the bindis have evolved as a decorative item in the modern times.

In the olden days, it was considered a decorative item and a must only for the married women. Now it is worn almost by everyone irrespective of the age, caste, creed, religion or the marital status of a girl. The popular bindis are the self adhesive bindis having a sticky feel on the other side. Hence it helps the bindi to stick to the forehead of the person without slipping off easily.

They are easy to apply and are disposable too. Tilak, kumkum, pottu or tilakam are the various names given to the Bindis according to the culture or country where they are used.

Bindis are Popular among Some Western Women

Bindis are also popular among some western women who have converted into Hinduism, or Vaishnavism. Some Muslim women belonging to Bangladesh also use the bindis. It is an amazing fact that the bindis were trendy among the US girls in the mid 90s. For some it is a ritual or a decorative jewelry. While for others, it is simply a style statement.

Modern girls prefer it to wear only in formal and traditional occasions. The bindi’s popularity depends upon the latest trends in the fashion world. No matter what the size of the bindi is, it is definitely eye catching. Traditionally, bindi is red or maroon in color>.

The trend of bindis also has some religious significance attached to it. The exact place on the forehead where the bindi is put is considered as the sixth chakra or the ‘ajna’ because it means wisdom is concealed there. It is the outlet for the ‘kundalini ‘energy from the body.

This is the point where the total concentration is gathered and put together by retaining the energy. It is the point which is regarded as center of creation. It symbolizes auspiciousness and fortune.

Many women wear the bindis because of their religious value. It is taken as a cultural as well as a social sign by many. Bindis act as a safeguard against bad luck and ill omens. The bindi also portrays a sign of a woman’s femininity and strength.

The Bindis is a Ssymbol of a Woman’s Marital Status

The bindi plays a very important role in many women’s lives because it is a symbol of their marital status. On the husband’s death, the woman should at once remove the bindi from her forehead and use it if she marries again. Otherwise, if she wants, she can use black bindis.

This signifies the position of the bindi in the society. Saffron powder along with kusumba flower makes a perfect bindi because it has a magical effect. Bindi helps in enhancing the overall look of the outfit that a woman puts on since it helps in brightening up the whole face.

Binds are popular in India to such an extent that it has become a must for not only the urban woman of today, but for all the rural and slum dwelling women as well. Each woman has developed her own way of applying the Bindi.

The urban woman has become more trendy and decorative in her application of a Bindi in buying it from the malls, whereas the poor woman buys it from the local vendors or from the little carts that come to sell it from locality to locality. The Bindi bought from both these places serves the same purpose of enhancing their beauty for these classes of women.

Precautions should be taken in the application of Bindis as well. Some products are cheaply prepared which may cause skin infections and allergies. Bindis should be hypoallergenic tested and then only one should use it. Now the conclusion is that every good thing has its pros and cons; so, it depends upon us to take some safety precautions before going for it.