Dakshinavarthi Shankh – a very Sacred Object of the Hindus 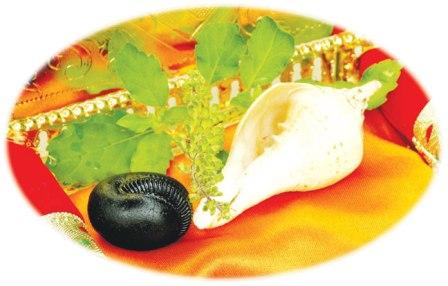 The Dakshinavarthi Shankh is a very sacred object of the Hindus and it is also important because it is regarded as the symbol of Goddess Lakhsmi. It is actually a conch shell of a huge sea snail. This shell is especially taken from the Indian Ocean from a particular species of snails found in this region. The conch shell chosen should be a right handed conch shell.

This kind of shells is generally white in color with brown spiral linings on it. It is very difficult to choose between the real one and a fake one. The one that has a rare and unique reverse –turning spiral is the real one. The genuine one also belongs to the species from the Indian oceans and not from the species from Florida, U.S.A.

There are many conch shells found in the ocean that open from a left opening but the Dashinavarthi Shankh should be the one which when held in such a way that the spout is in the upward direction , will have the spirals turned towards the right. The real ones also have 3-4 ridges on them.   It is also known as the Lakhsmi Shankh as it is used as a calling card to the Goddess Lakhsmi, the goddess of wealth. It is a kind of a sacred artifact in the Hindu religion.

The uniqueness of this shell can be judged by the fact that out of every 100,000 conch shells, there is only one which is truly the Dakshinavarti Shankh. The true Valampuri shell or the Lakhsmi Shankh is the one that has five folds in the cavity of the shell which are known as ‘Panchajanya’. The ones which are completely snow-white in color are very unique and expensive.

Placing of the Conch Shell

The installing or the placing of the conch shell inside the place of worship involves a number of procedures and rituals. After choosing a right handed conch shell, one should put it on a plate. Then the conch should be bathed with honey, milk, sugar, ghee and yoghurt. The deities are also bathed with   holy water.  Some mantras or chants are recited after the burning of incense sticks to purify the air. Some offerings are also given in the form of rice and milk.

The Dakshinavarti Shankh has great importance in the Sanatana Dharma of the Hindu religion. Hindu deities are seen carrying this conch shell in their hands in the Hindu art and paintings. This further emphasizes the significance of this shell. The Lakshmi conch shell is said to bring good fortune and wealth as it is related to the Hindu Goddess of wealth.

Some rituals that are used when using this shell are bathing of the deities and using the shell for drinking and then offering chants or Vedic verses or mantras to the Goddess.  The burning of incense sticks and the offering of rice and milk is also done. The Goddess Lakhsmi is said to be the consort of Lord Vishnu. She is not only the goddess of wealth and fortune, but she also removes sorrow and unhappiness but also bestows intelligence, freedom and success to her devotees.

The conch is believed to remove the power of curses of the other people, evil omens and also sins. It also purifies the surroundings by eliminating the negative energies from the place where it has been kept.