Lakshmi Paduka – the Sacred Foot of the Goddess Laxmi 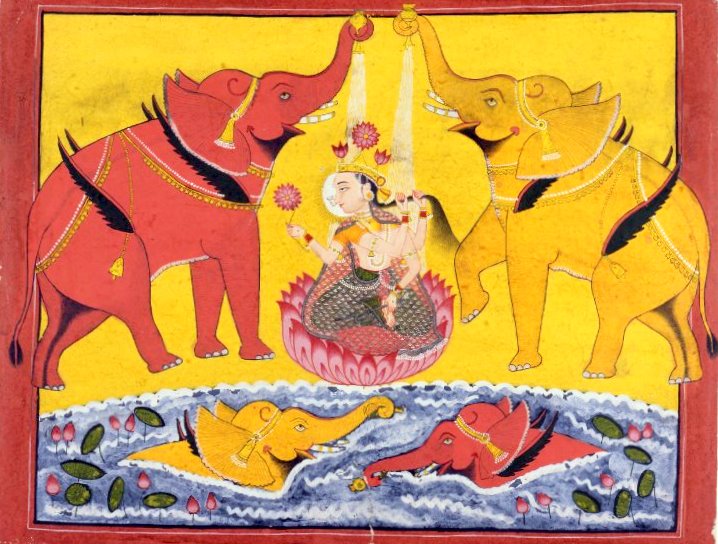 Manuscript painting of Gaja-Lakshmi, ca 1780 AD. “Painting depicting Gaja-Lakṣmī; an image of the goddess Lakṣmī, who reigns over fertility and good fortune, seated on a lotus with an elephant (gajah in Sanskrit) on either side.

It is also considered as a very unique lucky charm having its relevance even in the Vedas and the Puranas. It is also regarded as a symbol of wealth and prosperity in the Hindu religion as it is related to Goddess Laxmi.

The story goes that when the demons (Asuras) and the Gods (deities) were performing the churning of the great ocean or the ‘Samudra Manthan’ taking the help of a mountain to get the Amrut or the divine nectar, 14 gems came out of the ocean during this process. At this time, even the Goddess Laxmi came out from the ocean fully dressed up as a bride with a lotus Mala in her hands for Lord Vishnu. 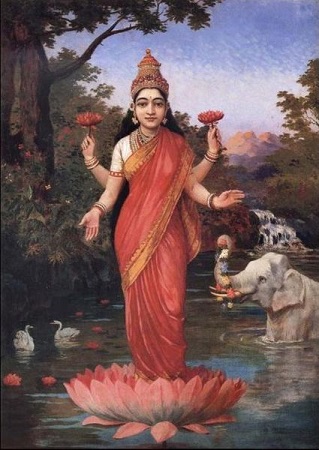 She emerged from the ocean as the 15th gem; everybody was amazed and they started taking her name loudly. At that moment, she set her foot on the heaven leaving an imprint of her foot in heaven. There were 15 symbols on the footprint left by her.

All the deities of heaven took the impressions of her foot and kept it with them, and celebrated this occasion by lighting lamps or divas. This is one of the reasons of celebrating Diwali, the festival of lights and this impression taken by all the deities or Gods in heaven is known as the auspicious Laxmi paduka.

Each symbol on the foot of the Laxmi Paduka has its own significance. The left foot has the ‘Teer Kaman’ that helps in fulfilling of aims in life, the ‘Matsya’ or the fish that is said to bring wealth and fortune into one’s life and the ‘Kumbha’ or the pot which signifies good health.

The left foot also has the ‘Chandra’ and the ‘Tilak’ that represent victory and purity. It also has the symbol of the ‘Trikonakar Mangal Bindu’ or the triangle that is said to bring wealth and property into one’s life, and the ‘Chakra Rekha’ that creates positive atmosphere in the life of an individual.

The right foot also has some symbols each having a significance of its own. It has the symbols of the Swastika that gives wisdom and blessings and the ‘Chakra’ acts as a protector from the evil forces. The ‘Shankh’ spreads purity in the life.

It also has the symbol of the ‘Surya’ and the ‘Vajra’, the former a bringer of success whereas the latter helps in improving focus. The symbol of ‘Dhwaja’ or the flag represents the right direction in one’s life and the ‘Trishul’ provides religious purity and strength.

The ‘Kumbha’ signifies wealth and property and the ‘Kamal Pushpa’ invites blessings and prosperity in the homes. Installing or placing of the Laxmi paduka is considered very lucky and auspicious as it enhances wealth and brings prosperity into the houses or offices.

The Laxmi Paduka also aims at increasing the knowledge of a person and his all round development. It helps in curtailing the malefic effects of the planet Jupiter. The Laxmi Paduka can be charged with the sacred mantra, known as the Mahalaxmi Mantra.

Many Indian homes have been seen keeping this symbol on the floors of the entrance doors. The Goddess Laxmi has always been invited into the homes through various ways of worship and rituals. Everyone wants to be wealthy and prosperous in their lives. Goddess Laxmi is believed to be the Goddess who showers blessings of wealth and prosperity. So we can see that why the foot of the goddess is considered so precious.

The daughters in the Indian culture have always been considered the replica of Goddess Laxmi. This is solely the reason why the footprints of the Indian bride are taken on the very first entry into her husband’s house.

In some way or the other, the footprints of Laxmi has always been regarded a very lucky symbol.