Mundan Ceremony; the Child’s First Haircut (shave of the head)

The ceremony of shaving off the head of the child is known as the ‘Mundan ceremony’ by Indians. It is an age-old tradition that dates back thousands of years. In English, we call it ‘tonsuring’. The other traditional name for the mundan is ‘Chaula’ or ‘Choodakarana’. Generally the Mundan ceremony is held on the first year or third year of the life of a child.

The usual concept of mundan is related to boys but in some cases, girls also have to undergo the Mundan ceremon. That’s depending on the various customs and traditions of different regions. The mundan ceremony is not only a Hindu traditional ceremony. Some Muslim communities also follow the custom of shaving off the head of the babies.

The Sikhs also have a tradition similar to that of the Mundan ceremony. It is known as the ‘Kesi Dehi Ceremony’ in which curd is put on the heads of a child.

The Mundan ceremony involves the first hair cut of the child which is taken as an important custom. It is said the first shave of the head of the child removes the negative impacts of the past life of the child. Mundans are also a way of increasing the life of a child and for a better future ahead.

They also say this ceremony also protects and acts a safeguard against evil eyes. The child’s hair just after his birth is considered to be impure. Hence, it has to be removed in order to clean the body and soul of the child.

The Mundane Ceremony is Generally Regarded as a Purification Ceremony 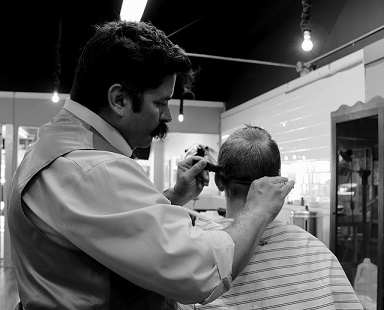 Just an ordinary haircut pictured here. Can you save money on it? Click image to see.

Many people shave the hair of their child or children many times to ensure better re-growth of hair while some others do it to release the body heat which sometimes becomes excessive.

This is done to keep the head cool. In some cultures, it is said that the Mundan ceremony helps in relieving the pain and headache associated with the process of teething in a child.

There is yet another belief which points out that having the head of a child shaved helps in improving the blood circulation in the body of the child. This process also stimulates the cells of the body.

The mundan ceremony, as a whole, is regarded as a purification ceremony. It should be held by choosing an auspicious date and time according to the astronomical charts and the Panchag. This should be the decision of the family priest as a whole. The havan fire is lighted and yajnas are performed in front of it by the priest.

The child is placed on the lap of the mother who sits on the western direction of the holy fire. A small part of the child’s head is shaven off by the priest while chanting religious hymns. Then the barber shaves off the rest of the child’s hair.

After that, the head is washed with Gangajal (water of River Ganges, considered sacred and holy by the Hindus). In the end, a paste of sandalwood and turmeric is applied to the shaven head.

Mundan can Sometimes be Harmful

The shaven hair is disposed of by throwing it into the Ganges River or by offering it to the deities. A small tuft of hair is always left on the head by the priest. It is known as the ‘Shikha’, which acts protection for the brain.

Mundan at times can be harmful too and a child may face serious consequences. There is this lady who went in for a Mundan ceremony for her son. He got his eyebrows shaved off in such a way that it has left a lifetime scar just over his eyebrow.

What happened was the barber was trying his level best to carry out the procedure. The mother was trying her best to make the child sit quietly (he was crying and rocking). Unfortunately the barber’s hand slipped, and hence the cut.

There are certain precautions which should be taken when shaving the child’s head. Sometimes barbers use knives which are not properly sterilized. This can lead to the harmful consequence causing sepsis, tetanus, and many other diseases.

Therefore, if traditions are not followed suavely, they can lead to other dangerous effects. That would cause a feeling of hatred in people for these rituals.

One should have devotion and warm feelings towards these rituals and beliefs. Then the coming generations finds it easy to adapt. Rituals and traditions should not become a thorn in the throat for them.

Questions about the Mundan Ceremony

Looking for the wordings of Mundan ceremony ? Thanks!?

In all community in general and Hindus in particular, Mundan ceremony is performed. When child becomes of 5 year age or so, he gets first time head shaved. Normally it is done at some auspicious place like temple, seashore or on the bank of pond etc. Most of the family members are invited to witness the occasion. Visitors give gifts to the child and pray for well being. In return, they get good feast from the parents. They say, Lord Krishna’s Mundan ceremony was performed at Ambaji Temple in North Gujarat.

I’m not even sure what a Mundan is, but the person who invited you will probably be glad to tell you. I’m kind of surprised that they didn’t tell you when they invited you.