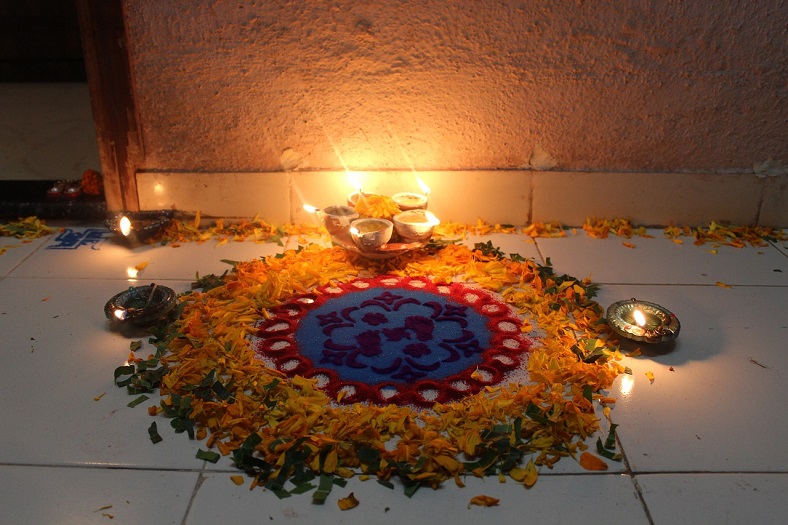 Colors have always played a vital role in the traditions of India. It is one of the basic elements of Indian culture. The tradition of Rangoli is one of them. ‘Rangoli’ is a folk art belonging to the Indian traditions. It has its origins in India and is basically a tradition from the state of Maharashtra.

But at present, this traditional art has become a popular practice in the whole country. Rangoli designs are drawn mainly on the entrance doors on special occasions and festivals. An artistic Rangoli can be made by the use of colored powder, flowers, sparkles and diyas (lamps). The other name of Rangoli is the ‘Alpana’ as called by the people of West Bengal.

Rangolis are the decorative designs drawn on the floors of the living rooms, verandahs, courtyards and the entrance gateways as a sign of warm welcome to the deities during the festive occasions. It is a very age old tradition that has followed from generation to generation and is still popular in many states of India.

Different states have different style of making the Rangoli and also have their specific names and significance. In Tamil Nadu, It is known as the ‘Kolam’ and its specialty lies in the fact that the Tamils make use of rice powder to make the designs. It is a common ritual to draw the Kolam in the courtyards every morning.

The traditional Rangoli drawn with the help of flowers and floral designs is called the ‘Pookalam’ or the ‘Onam Rangoli’ in the state of Kerala. This type of Rangoli adorns every Malayalee home during the ten days’ festival of Onam.

Rangoli Designs are Popular During Diwali and Krishna Janmasthami 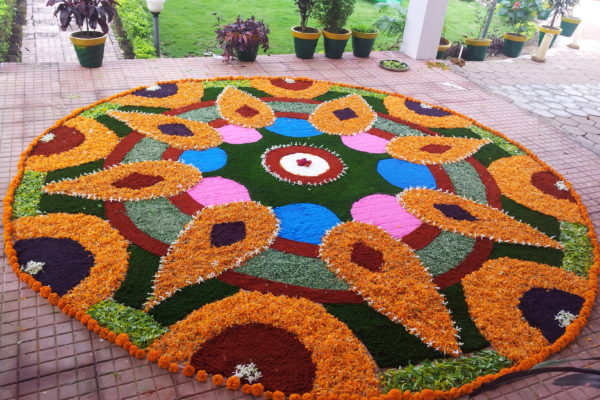 Rangoli designs are also popular during the festival occasions of Diwali and Krishna Janmasthami. It is considered very auspicious and therefore, it is a compulsory practice during many Hindu festivals. A decorative motif is drawn with the help of a white powder chalk and then it is filled with colored powders and flowers. This is done to welcome the deities into the house.

On the eve of Diwali, it is said that Goddess Laxmi enters the house to bestow her blessings and fortune on her devotees. The Rangoli is an elegant way to please the Goddess and to honor her with a warm welcome. On Krishna Janmasthami, the Rangolis are made to celebrate the birth of Lord Krishna.

There are numerous designs of Rangolis depending upon the various cultures, folklores and traditions followed by different regions. Mangoes, peacocks, flowers, swans, creepers and climbers are the popular designs that are used in the traditional form of Rangolis. In the olden days, the colors from the leaves, flowers and the barks of the trees were used to put colors into the Rangoli motifs.

The modern people make use of synthetic colors. To draw the basic outlines of the Rangoli, turmeric powder, rice powder and vermillion is used. Rangolis are considered sacred as they invite good luck and fortune into the homes. They are also said to ward off evil spirits and bad lucks from the homes. It is also a symbol of joy and peace. It has a great cultural as well as religious significance.

Many places in India Teach this Art in a Professional Way

Every Indian home lays emphasis on the importance of Rangolis. From the very childhood, girls are asked to go for a crash course in Rangoli during their summer vacations or the small winter vacations. One can also make a part time career in teaching how to draw Rangolis.

There are many Rangoli workshops in many parts of India that are prominent in teaching this art in a professional way especially in Mumbai. Some workshops also hold Rangoli exhibitions from time to time to display their work. 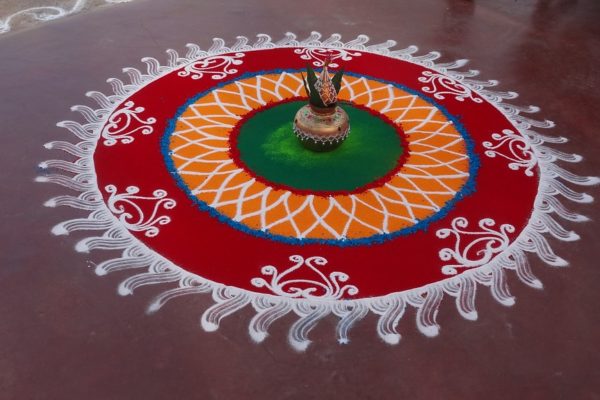 Various Rangoli competitions are also held in the schools and the neighborhoods to increase the popularity of this colorful tradition. India, basically being a colorful country, is also well known for this traditional art. In India, the bridegroom’s family makes sure that the girl knows how to draw a Rangoli apart from other household chores, and art and crafts. It is considered an important art and becomes compulsory for all the Indian girls to be efficient in it.

This also throws light on the artistic qualities of a girl. Ask me; I know it all. I come from a conservative Marathi family where I was taught the art at the age of 6. Every time my mother would ask me to draw Rangolis, I would pay total attention to it; otherwise, I knew I would be scolded by father who would use the same dialogue over and over again – “Can’t you get this little thing into your head? If your memory is so poor, why are you studying?” By the time I was 15, I was a master in Rangolis.

The art of Rangoli is not only a cultural tradition but it also portrays the love and eagerness of a woman towards decorating her home.