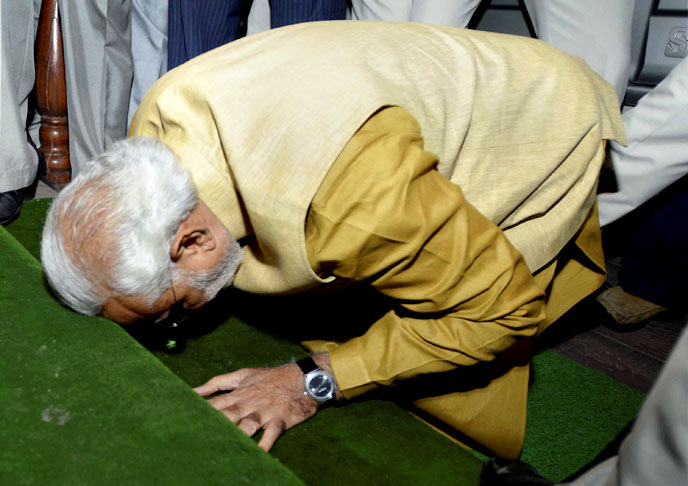 This gesture is a part of India’s rich culture and heritage, and we are proud of such traditions in our society as it is the only gesture that makes us different from the whole world.

A person who touches the feet of the elders shows that he or she is aware of one’s own culture. Knowing about the Mahabharata or the Ramayana does not matter so much as that of following this gesture.

Pranama is a form of “respectful salutation” or “reverential bowing” before something, or another person. It’s usually before grandparents, parents, elders or teachers or someone deeply respected such as a deity. It is found all over Indian culture.

There are six types of Pranam:

A form of pranama is Charanasparsha, (literally. touching the feet) a bowing combined with the touching of the feet, as a mark of respect. It may be seen in temples during darshan.

This related type of pranama is most common in Indian culture. It is done in order to show respect towards elderly people like parents, grandparents, elderly relatives, teachers and saints.

Children are taught to Touch the Feet of the family 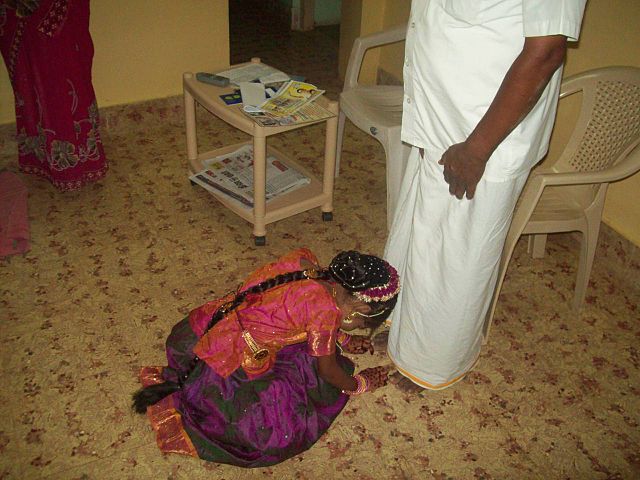 Touching feet is a very nice tradition as it shows the respect of the younger generation for the older ones. In India, it is one of the first and foremost etiquette that one learns from a very young age. This is one of the lessons given to the children among the various classes (be high, be low) in which one shows respect for age.

Children are taught to touch the feet of all elders of the family as well as respected elder relatives. Same for family friends. If the other person is a spiritual person of society, then also the custom has to be followed.

Some children are also taught to touch their teacher’s feet. In joint families, this custom is easy to adapt by the youngsters as they see their parents following the tradition of touching feet towards their grandparents, or elders.

While the children are asked and reminded often to touch the feet of their elders, for the elder children this reaction is expected to be a spontaneous one. Today in our homes it has become an involuntary action for all. Some foreign-returned individuals also show that they have not forgotten their culture. They also follow this tradition after returning from abroad.

It has been noted that their elders are overwhelmed by just seeing this one action of theirs. They feel their teachings and upbringing has not been wasted. Just imagine that such a small gesture of touching feet can give such immense pleasure to the elders.

Other special occasions for touching feet are:

After a wedding ceremony is over, the newly wedded couple has to touch the feet of all elders and respected members of families of both the bride and groom. This is compulsory custom without which Indian wedding rituals are said to be incomplete.

The priest asks the bride and groom to do so just after the traditional ‘pheras’ are finished. In some families, children are expected to daily touch the feet of their parents while going to bed as well as when waking up in the morning.

Today our present generation is quite uncomfortable in following this tradition heartily and with emotions. From very early childhood, one should inculcate this habit in the child in such a way that it becomes a necessity for the child to receive his parent’s blessings while touching their feet. Some people take it negatively. They think it is just an act of being submissive in front of the other person.

This is not so. There is also a give and take relationship involved in this tradition. In giving respect by touching the feet of others, it is repaid with a gesture from the other person returning it with blessings and love.

Whatever may be the reason, the only thing that matters is that all these traditions and customs should be solely from the heart and not just out of formality. Bending down to touch the feet with an unwanted feeling of doing so is of no use at all. Traditions and customs should have personal indulgence and joy. They should not just be a formal ritual.