Also known as the sacred thread ceremony, the Janeu Ceremony is the traditional ceremony in which the consecrated thread is worn by the highest rank of the society. Those are the Brahmins of India. Janeu is the holy thread worn by a male Brahmin.

Some of the other caste’s males also wear this thread like the vaishyas as well as the Kshatriya clans. Different castes have different ways of performing this ceremony. The main aim of this thread ceremony is to suggest that the complete development of a man from his younger age. This is a very auspicious ceremony celebrated with a lot of pomp and show.

The janeu thread is a very thin and consecrated thread. It is made up of a number of distinct and separate cotton threads. Each thread symbolizes that the person is growing up. The different sects of the society have different types of janeu threads worn around them. The one meant for only the Brahmins is the Brahmgandh janeu which consists of either five or three knots.

The Vishnugandh Janeu is meant for all Other Classes of Society

The Vishnugandh janeu is meant for all the other classes of the society. It consists of only a single knot. The Brahmin who takes a decision of becoming a scholar must wear this thread from a very early age of five. The Kshatiyas are the warrior class and they are known for their valor and strength. So if a Kshatriya wants to wear a janeu thread, he must wear it from the early age of six.

The normal janeu thread is usually made of the cotton fiber especially made for the Brahmins. The janeu threads are made out of wool and hempen are also worn by the Vaishyas and the Kshatriyas.

The traditional name for the Janeu ceremony is ‘Upanayanam Samskara’ which is grandly celebrated by the Brahmins. The right age for this ceremony to take place is anywhere between seven and fourteen. In some cases, if this ceremony has not taken place because of some reasons then it is compulsory to perform this ritual before the wedding ceremony of that person.

When the thread is worn by a man, a group of people chant the sacred verse, the ‘Gayatri mantra’. The thread is turned and twisted in such a way that it points upward. This is done to make sure that the positive quality of truth is still prevalent in this world. 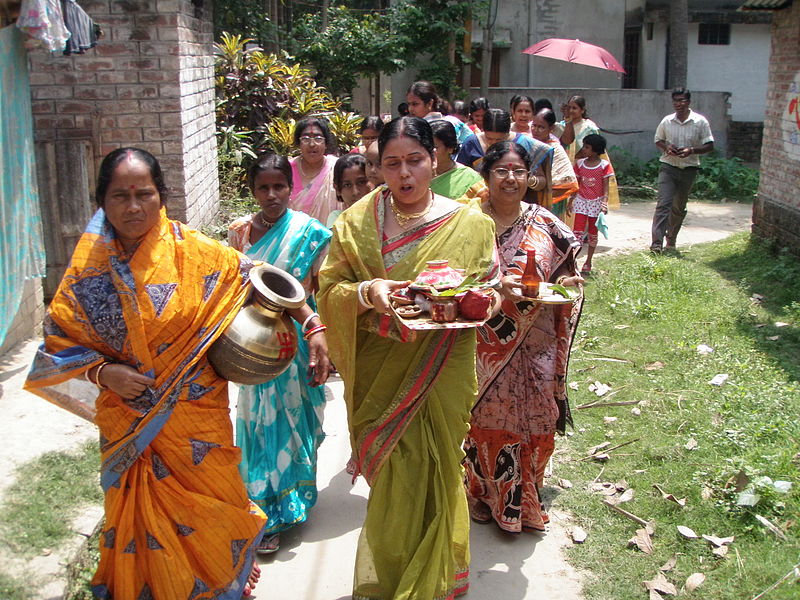 Inviting goddess Ganga is a part of rituals of Bengali Hindu Brahman or Brahmin before starting sacred thread ceremony. Where a group of married women go to a nearby clean water body depicted as goddess Ganga for invitation. They collect the holy water from there to complete the whole function by mixing the water with the rest of other sourced water. According to Hindu belief, the entire holy functions should be done by the Ganges water. Photo by Biswarup Ganguly / CC BY-SA 3.0

It also makes him eligible to participate in all the family traditions and rituals after this ceremony. This shows the social significance that this sacred thread portrays.

The three strands worn by the Brahmins have different significance. Some people say that they stand for the three Hindu Gods. Those are Lord Mahesh, Lord Vishnu and Lord Brahma respectively. Some people refer it as the present, past and the future of one’s life.

Some others believe that they stand for the three goddesses or the Devis. Many others take it as three debts that one owes to one’s teacher, parents and the sages respectively. For some it also represents the earth, the heaven and the Nether regions.

A Broken or Torn Thread is Regarded as Inauspicious

A broken or a torn thread is regarded as inauspicious; so it should be replaced as soon as possible. Janeus should be worn in such a way that its sanctity and purity is not broken. It should not be taken just as an ordinary thread. Some traditions have to be followed by maintaining their sacredness. The Janeu Ceremony, the traditional ceremony by the Brahmins of India is one of those sacred ceremonies.